Letter based on Pedro’s “Dream of Liberation”.

A dream that showed him how to build a world of Peace in harmony with Nature as Humankind’s partner and main provider.

Ever since the corona virus first appeared in December in 2020 it has been in the news almost daily. Every day we hear about the spread of it and about the number of people it affects. Some people get really scared.

Since February this year, the main news now is the war in Ukraine. Hardly anybody had expected this could still happen. We have been writing about the reasons behind conflicts, wars and other violence for quite some years.

The main reason being babelonic aberrations and untruths like ‘some people are superior to others and to Nature and have the right to exploit and abuse them’. We invite you to read the article “Lie of destruction” and other articles on this site.

The corona virus (corona means crown or top) had sort of united all countries around the world. The virus has been spreading out relentlessly and does not care about the borders of countries, political or social systems, social status, religion or not, gender, skin colour…

Nobody knows when the virus will really leave us. In the meantime, some politicians have been pumping up the general feeling of fear but also of distrust in politicians and in governments.

If this situation of fake news and confusion (some politicians still seem to indulge in them) continues for a certain period, this fear and distrust may well lead to social chaos. And history has shown us what that can lead to.

To us, the virus is yet another reaction of Nature to the way people treat her. All things considered, Nature is the essence of all and irreplaceable. Nature deserves our deepest respect. We are all part of Nature and respecting her means respecting ourselves. It should be logical and natural for all people across the globe to do so.

It is time to really stop all destructive activities, like wars and the production of food and other products using methods, parts and ingredients that are damaging to Nature and to people. It is time to think clearly and to clean up the mess Humankind has been creating for far too long. It’s now taking on proportions that threaten Life on Earth.

Ever since the early 2000s, we have noted down several inspirations about the relationship between Humankind and Nature. In them, you can feel that Nature is desperate about the damage inflicted on her and on us. She wants to be helped and be treated like a partner on the road to a sustainable, green and healthy future.

When we wrote down the messages, we often felt something inexplicable happened. We felt so close to Nature. It was as if the Mother of all mothers and of all that is, was calling us to act right now. Her gratitude was incredible and indescribable. But logical and penetratingly open. It was revealing. It was total trust and we were inspired to discover the key to solve the present crisis.

To many, this kind of experiences might seem strange (but rest assured we have convinced even psychiatrists that people and Nature do communicate in what we have code-named WiSOP – or the language of Peace (some people with a strong knowledge of WiSOP or feeling strongly connected with Nature can already sense what it stands for).

We call upon all leaders or people in power to let go of national pride and exclusively national interests. We call upon you for the creation of a truly global task force – USE or United for the Survival of planet Earth and to finally do what Nature expect us to do: cleaning up our planet before it is too late. Phasing out, replacing and eliminating all processes that pollute Nature and/or people. Restoring the natural balance of water, soil, air and food is essential if we, humans and not so humans, want to be taken to a sustainable, green and healthy future.

The task force should cross all borders now hampering real progress. It should be composed of the best experts in sanitizing and re-naturalizing our living environment.

The world requires all parties to join forces. The vast army of lobbyists polluting the minds of parties and politicians out of self-interest, should analyze themselves and understand the negative impact they often have on Humanity as a whole. They should stop hampering agreements the whole world needs to be taken in the interest of all people and of Nature.

The mess this world has become, simply cannot be allowed to get worse. Ever more people suffer because of it across the globe. The mess is an ideal breeding ground to develop viruses of all kinds – both physical and not so physical. Violence of all sorts can be seen as a kind of virus as well. Our society is ill, is an often heard comment and it is painfully true. It needs to change!

Please act now and join hands. Let go of national pride and of traditional animosity – animosity that is often based on misunderstanding and prejudices. Some date back to centuries ago. Some even to primeval times.

Join hands and launch this clean-up operation. Put the summum bonum or common good of all citizens first. Learn or perfect WiSOP or majai or language of Peace and learn how to apply its principles in business and in other domains.

Everybody stands to benefit from a campaign based on the respect for values that really matter and without which a society cannot function properly. It does not function now, as self-interest or egocentrism and the neglect of Nature’s needs dominate the present world – and hopefully it will be called the Old World soon, a world of madness and abuse”

As regards money, it should stop being the aim supreme for which many people would even hurt, maim or kill others and Nature.

Money should be a mere means and not an aim in itself. It should not keep us from really acting as we should. If we wait to have enough money or to let financial considerations be the guide, we will not make and see this world sinking into a deep hole.

We call on all those that have more money than they can ever need, to spend it wisely and to financially support DNA’s Global Clean-up Operation.

Many thanks indeed and let’s all go for it! 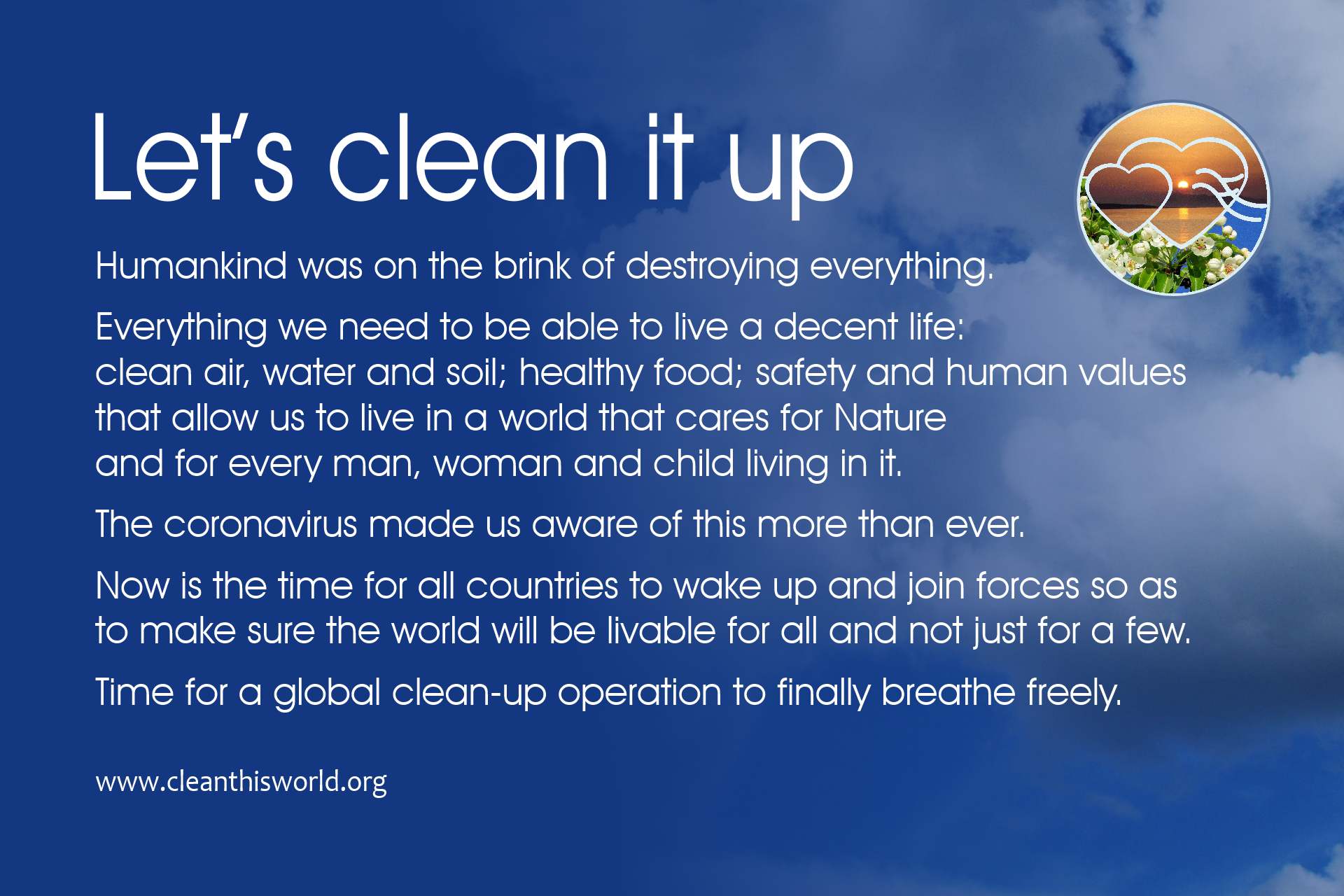 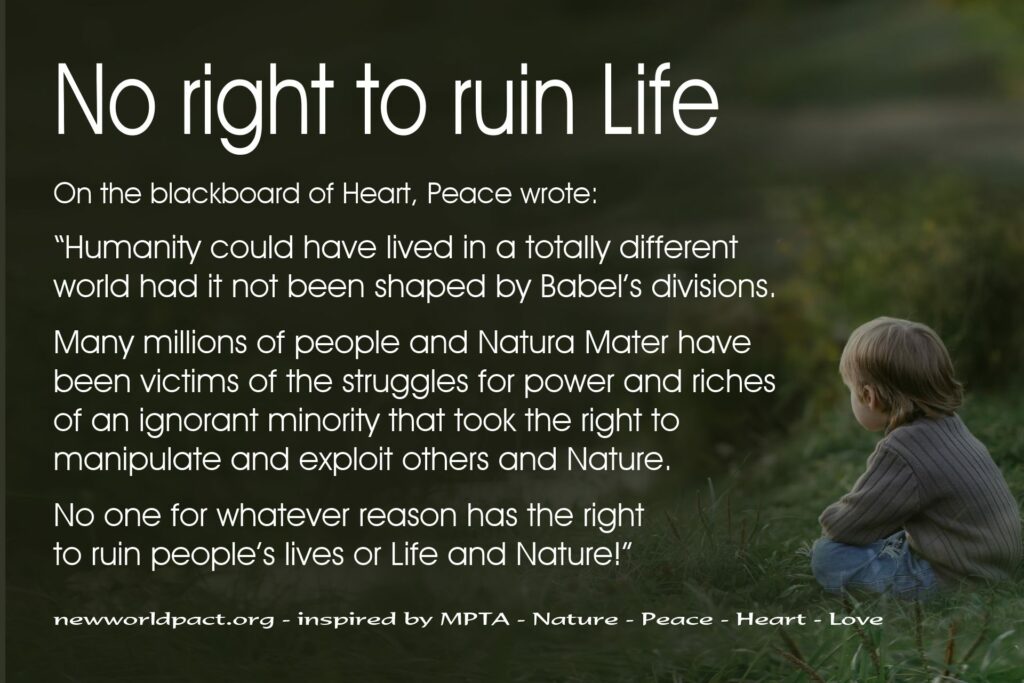 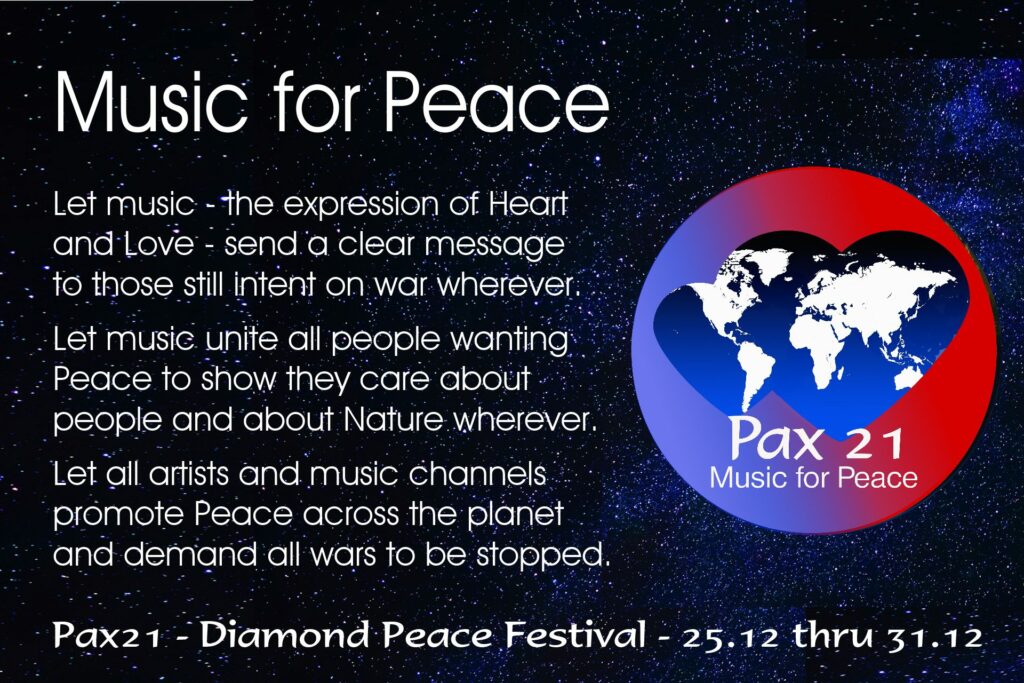