Human beings seem to have a natural urge to distinguish themselves from other human beings. They often want to be superior to others. They assign themselves and to the members of their clan or group characteristics that set them apart. These group characteristics often lend prerogatives or privileges to the group members. People not belonging to the group are excluded from those prerogatives and are often treated in a different way or even maltreated and – in the worst of cases – killed.

Throughout history, many groups have assigned themselves characteristics based on race, culture, language, religion, politics and economics. They have frequently led to violence, war and other atrocities. Still today.

Humanity has indeed evolved and has reached immense technological advances. Yet, it is sad to see that many members of the human race have not developed the right intelligence and continue to want to distinguish themselves on the basis of race, culture, language, religion, status, political and economic power.

It is also sad to see that those not having the right intelligence are generally the most vociferous and assertive people that succeed in imposing their views on the members of their group. They are the driving force of their group but unfortunately often driving them into the wrong direction.

Money or the financial power of certain people and groups contribute to imposing views that would otherwise not have a chance to prosper.

When looking at this world from a distance, it is a real mess of different driving forces that look set to drive this whole world apart.

Still today, people are maltreated or killed because they belong to a different race or a different religion. Still today, the economic and socio-political system of capitalism (in it, economics largely determine politics) imposes a way of living on society that is too hard on its people. It can be compared to a religion in that it has almost unrelenting faith in the power of money (the proverbial Golden Calf).

So many different beliefs. Often based on the wrong assumptions.

Anyone can see that this world is on a ship that is heading for a storm it will not be able to weather. It needs a new captain and new sailing instructions from which the wrong assumptions have been cleared.

The new sailing instructions should be based on humanity or human values. These values entail that no single race, culture, religion, language, political or economic system is superior to another one. The captain of the ship guided by human values is called Peace.

The whole of Humanity is on the same ship. Everyone will have to face the storm. No-one can escape from it and Humanity can only survive when all the wrong assumptions are thrown overboard.

The survival of this world requires the biggest joint effort in the whole history of Humanity. Billions of dollars are spent on fighting other people because they are of a different race, religion, political or economic system.

Those billions will be needed to invest in a global humanization (or strengthening of human values), the restoration of Nature (our main partner), peace education, poverty reduction, social welfare… in short, in peace and solidarity without frontiers.

Capitalism should realize it needs to reform and to be humanized and paxitized. Human values as solidarity, honesty, fairness, integrity and trustworthiness are essential ingredients.

Religions (still playing a main part in our society) should let go of the assumption that one of them is superior to others (leading to tensions and violence).

Some holy books might lead one to assume this, but recent communications (in WiSOP) indicate Humanity must develop its humanity or to strengthen the human factor. No single religion can save this world, but if they all work together and if political and economic systems equally embrace human values, they will make the contribution that is expected of them. To the benefit of the whole of Humanity. 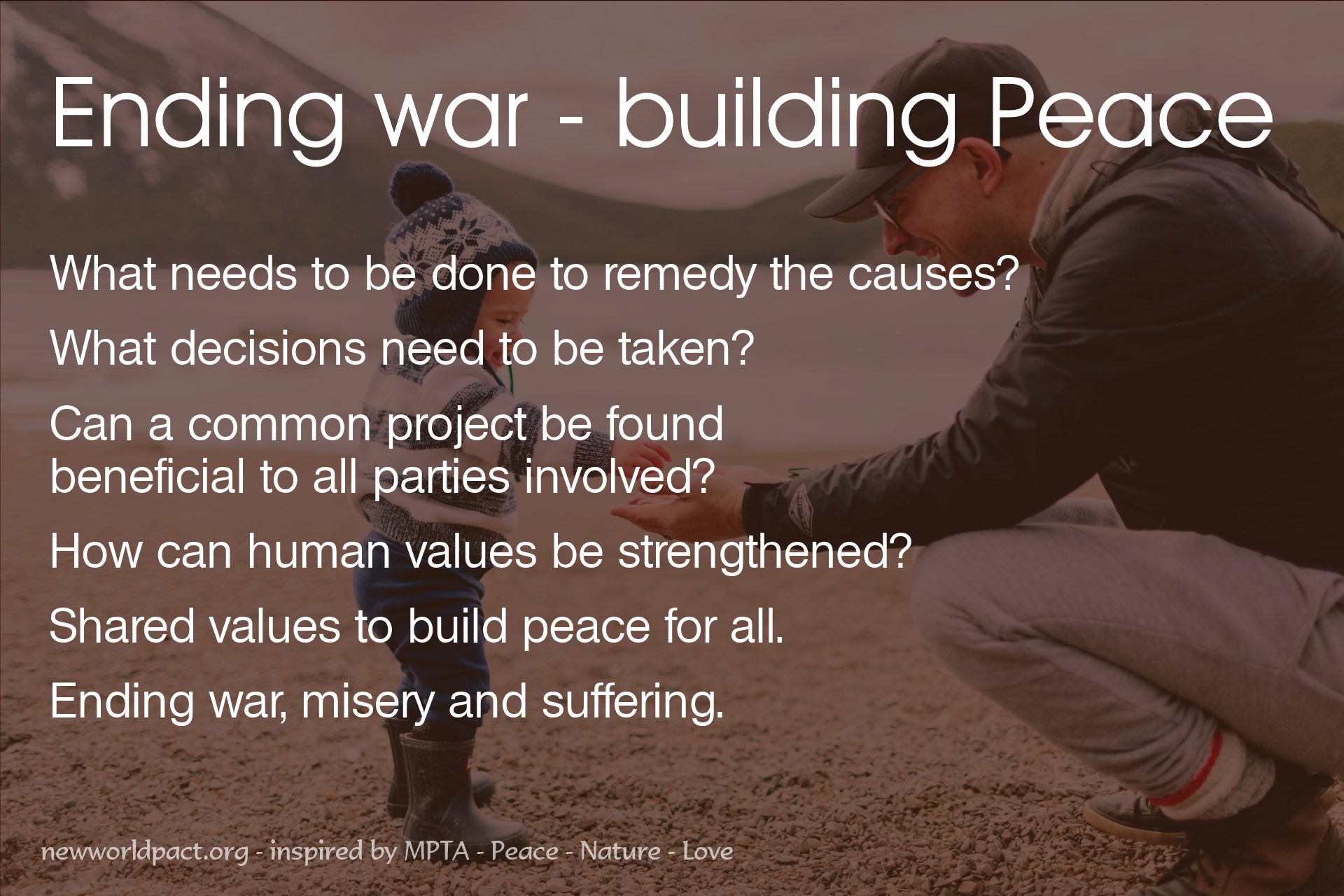 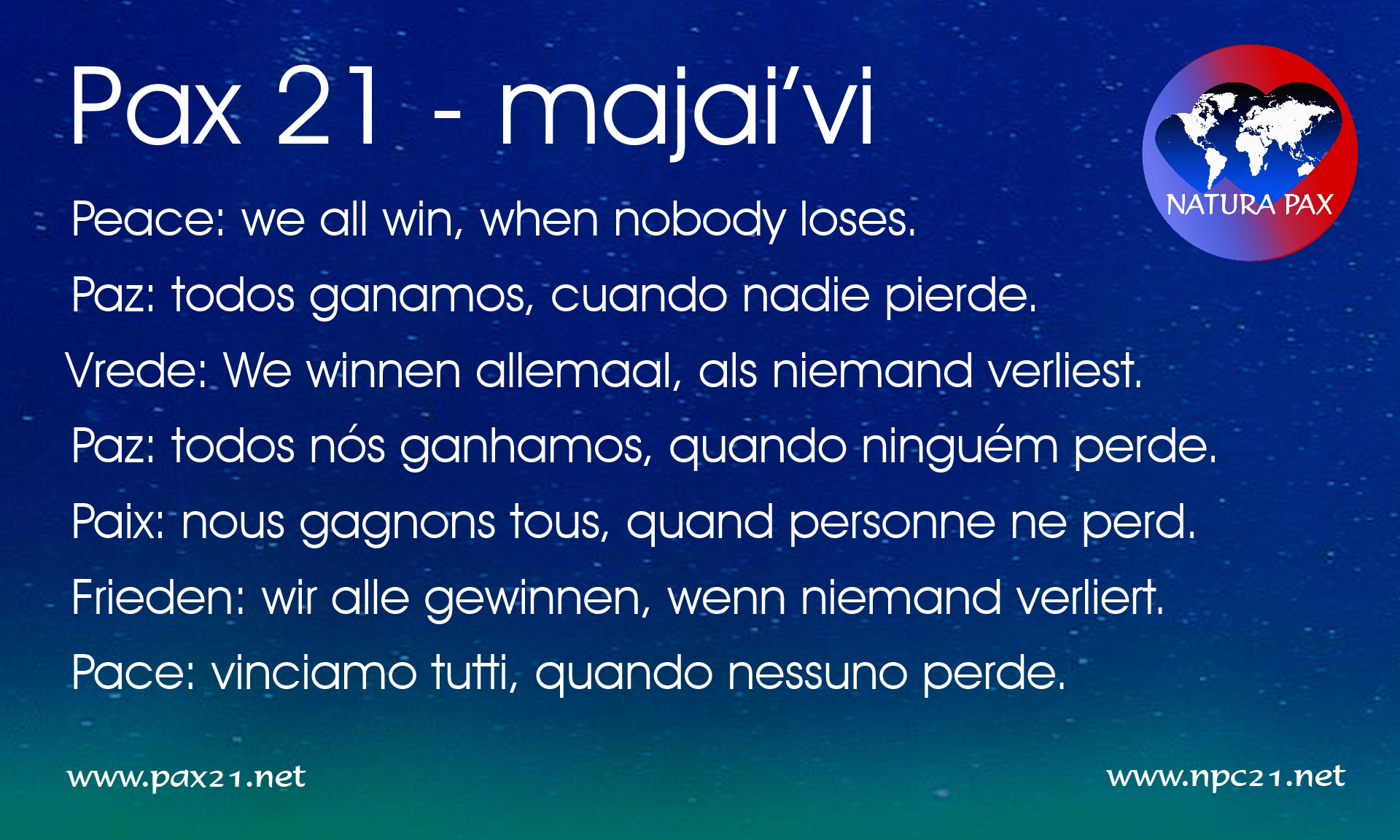